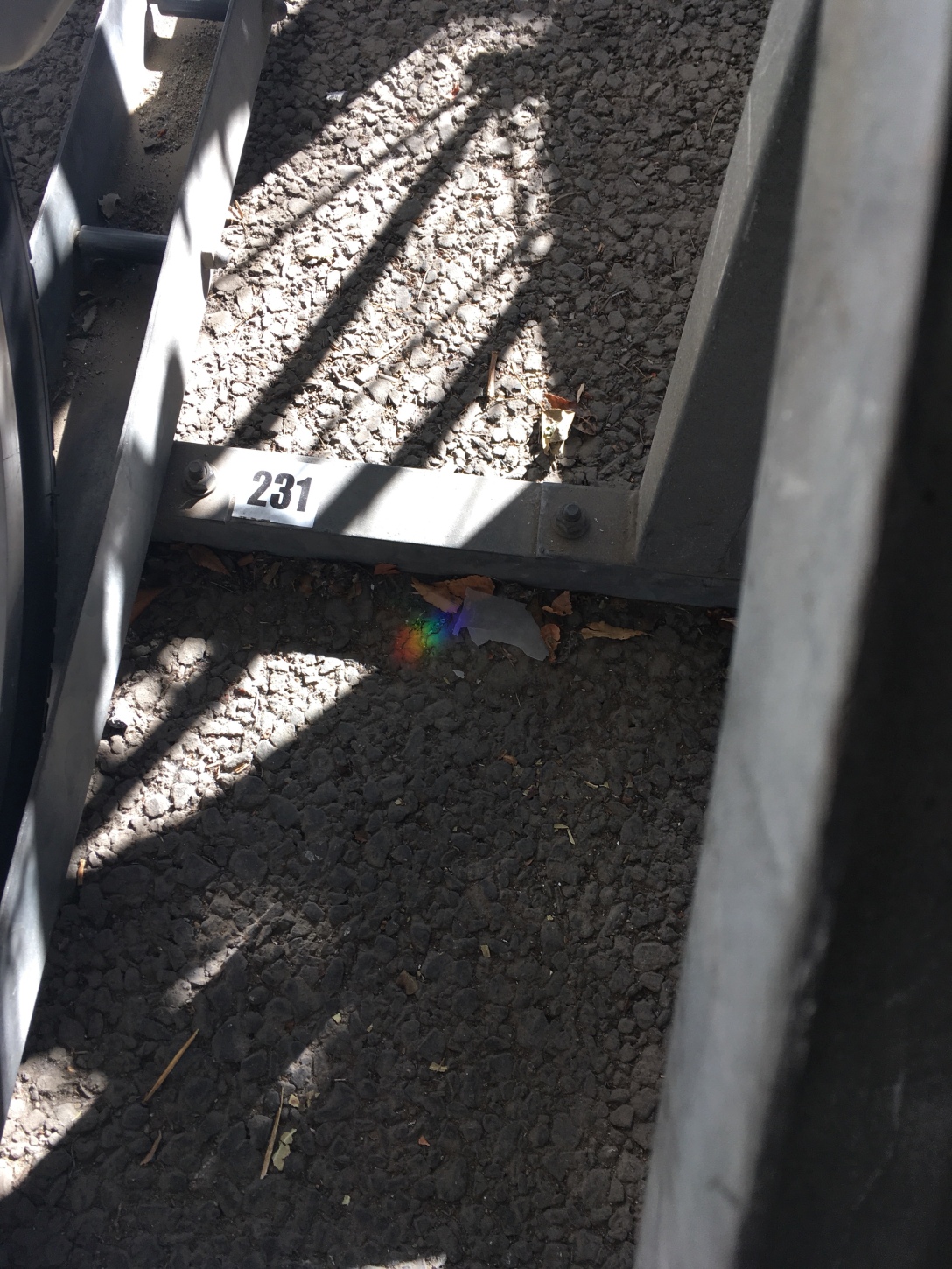 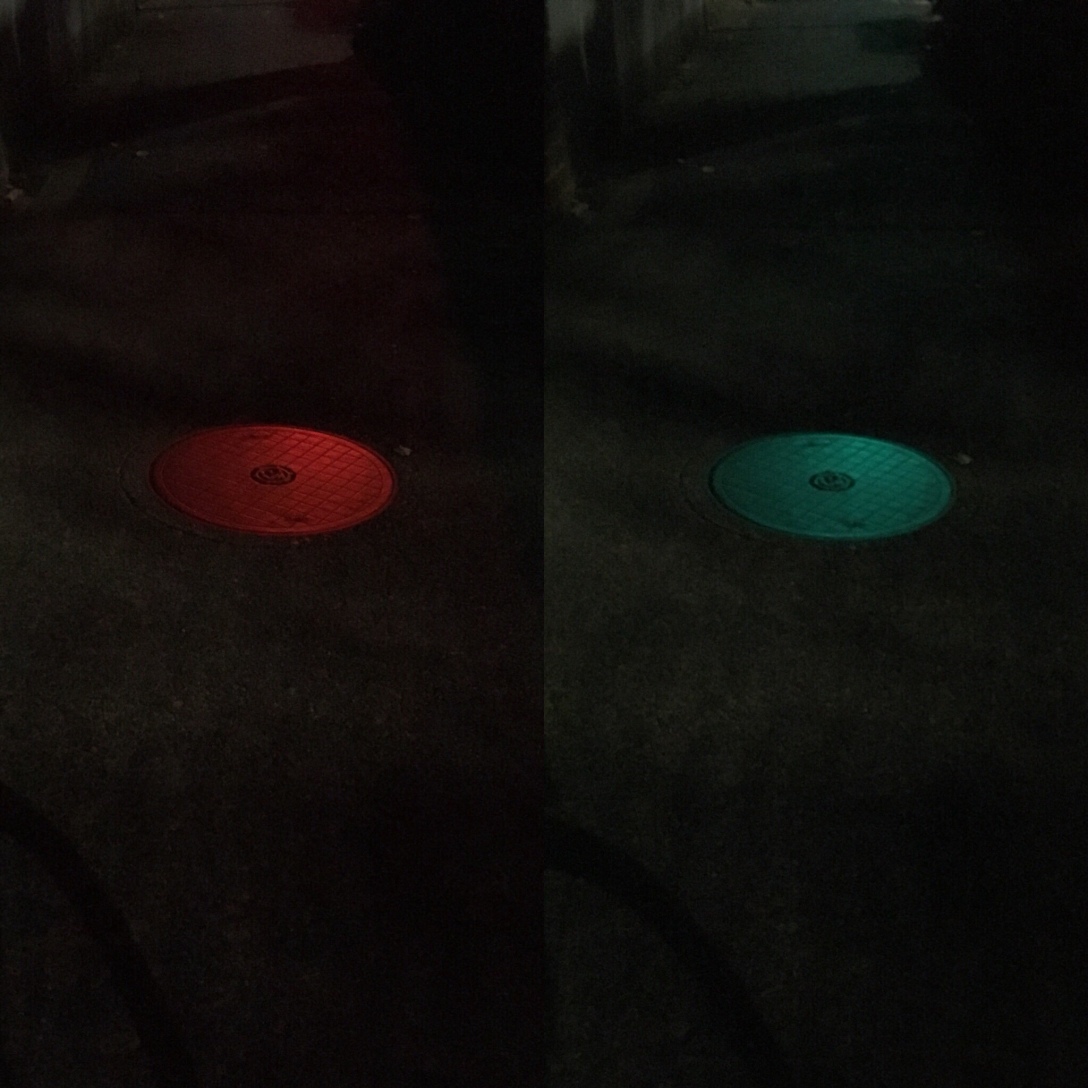 3. in the truest sense of the word

He is a big man, in every sense of the word. 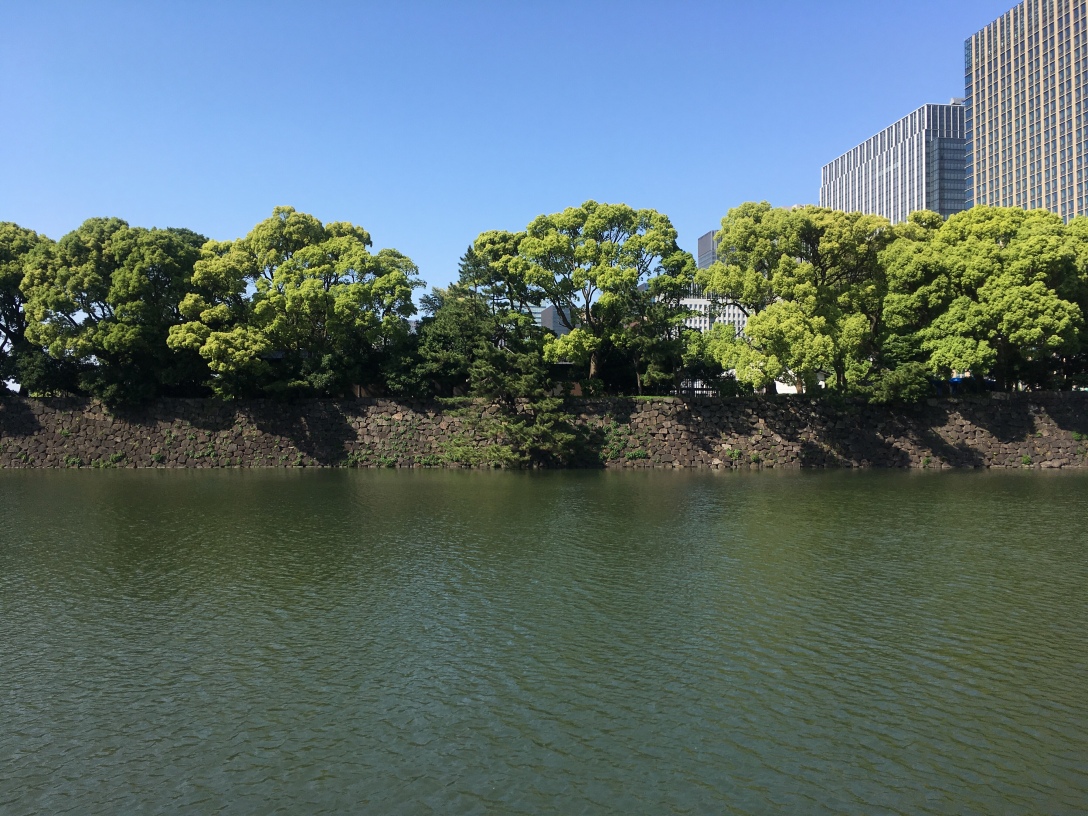 I was thinking about the huge rainstorms hitting parts of Japan this year. Besides the important issues of climate change and building effective evacuation policies and how they kind of relate with my recent obsession with the idea of bioregions (which calls for another post), I thought, where does all this water come from?

Have you ever wondered where rainwater comes from?

I only had a vague idea based on what I learned in elementary school, and became curious…

…and one thing I’ve learned is if it’s a topic you’re totally unfamiliar with, like science, you should check out the children’s books corner at the bookstore. And so I found the perfect picture book about water circulation.

地球を旅する水の話 (A story of water’s travels around the earth)

By Takeo Onishi and Aya Ryuzawa 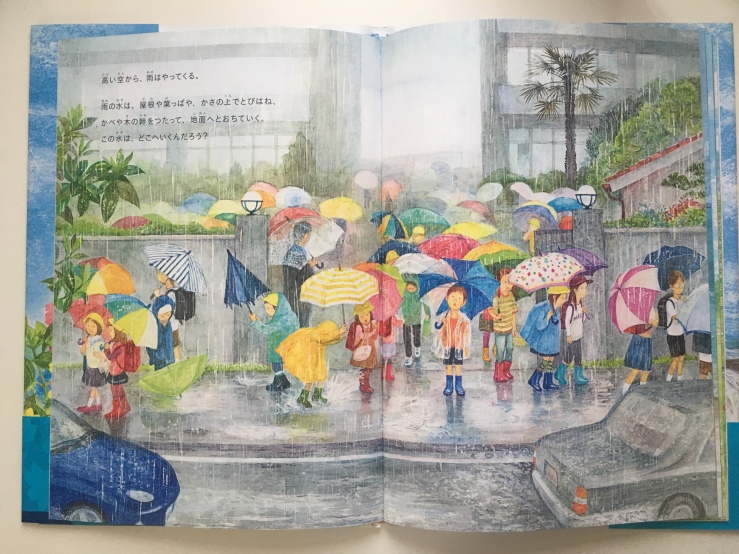 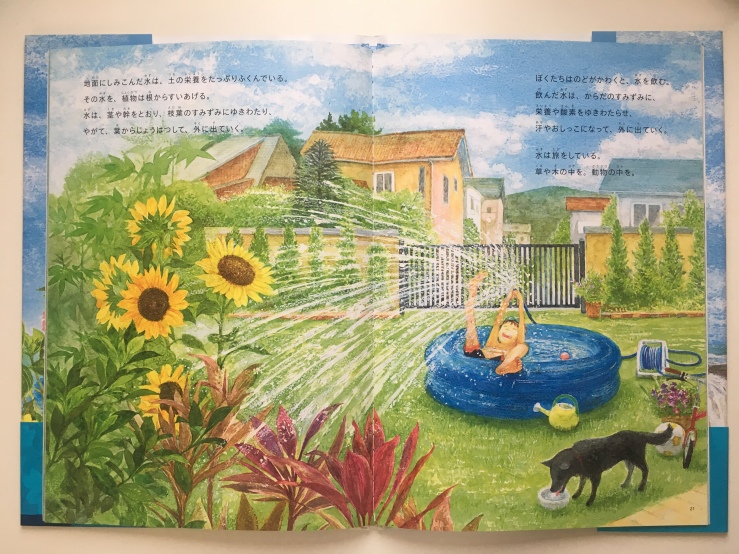 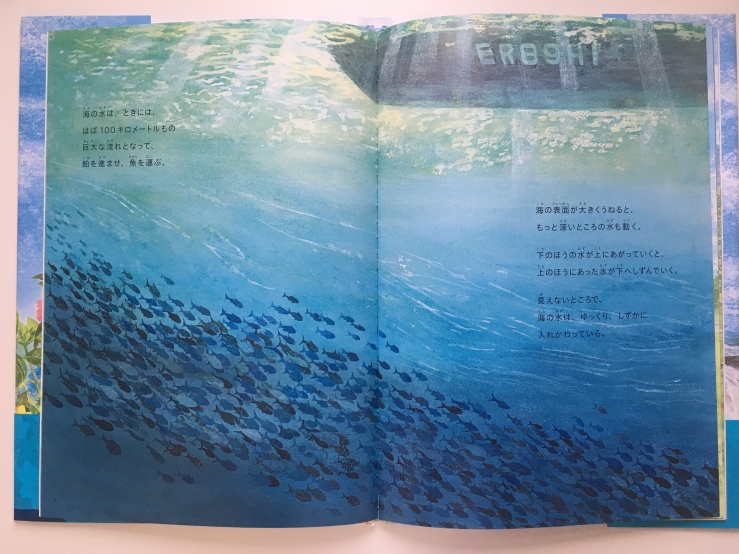 From the viewpoint of a young boy, this beautifully illustrated book guides you through the journey of water as it travels between three states: liquid, solid and vapor.

The amount of water on the earth’s surface has been basically the same, at least for as long as living organisms have been around. Water is an endlessly recycled resource. (This means there is a high possibility that, at some point in our lives, we have come across a water molecule that ran down the back of a mammoth in ancient times.)

This cycle is made possible through a complex system. Water molecules circulate by capturing and releasing heat energy, and this process is driven by many factors including sunlight and wind.

The author Professor Takeo Onishi, who specializes in hydrology, describes water as a transporter of information. Hydrology is the study of the movement of water and its interactions with other elements in the environment (including humans).

Knowing that we are part of this huge cycle, that we are bound together by water (we are 70% water too) shifted the way I see things. And yet we are barely aware of this reality.

At present our visual culture is predominantly linear and also “app”s away all the complexity which is making the world go round.

We probably didn’t need to know about such largescale systems when our physical impact on the earth was trivial, but now that we have entered a different realm, I think we need to know. We need to know what it is we’re affecting if we’re going to alter something irreversibly.

How can we visualize concepts such as circularity, ecosystem, interaction and process?

How can we embed them into our world view? 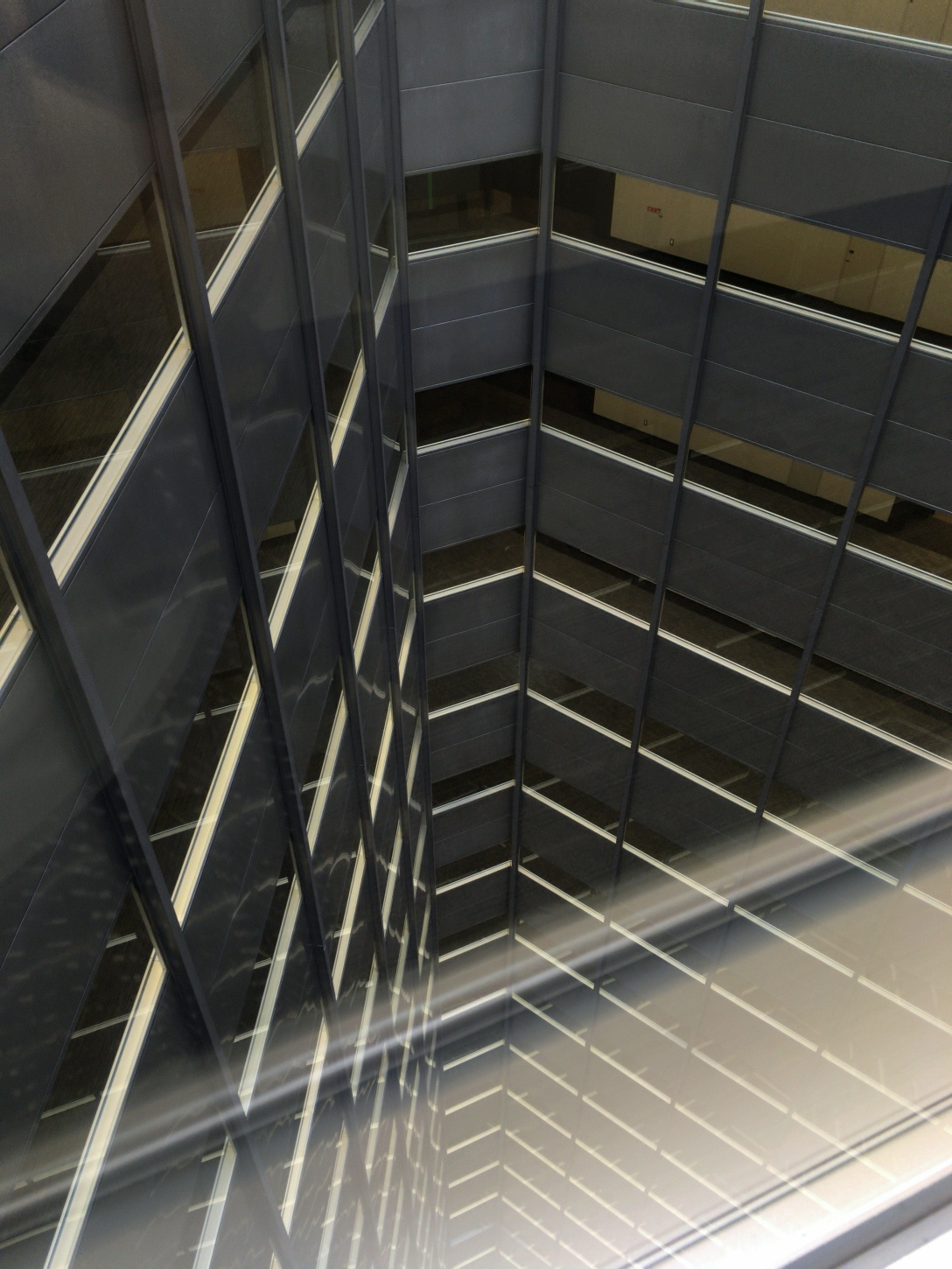 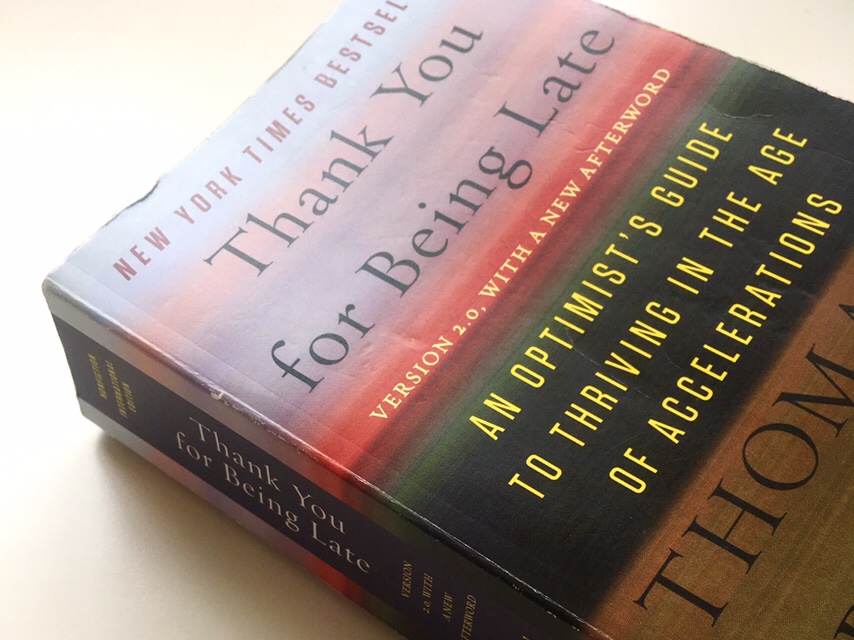 An Optimist’s Guide to Thriving in the Age of Accelerations 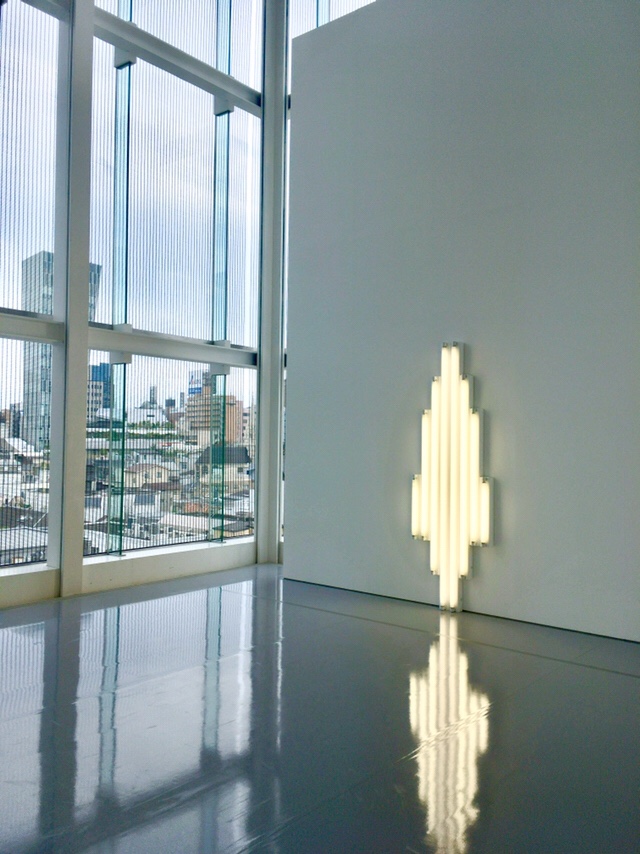 I fell in love with Dan Flavin‘’s work back in 2013, during my first stay in London. The Tate Modern had a room dedicated to him at the time.

Fast forward to 2017 and Espace Louis Vuitton Tokyo did a Dan Flavin show. And I had a question. What happens when the tubes expire someday?

I asked a staff member there, who told me that in fact, yes, they will expire someday in the future. According to what he’d heard, people who purchased the work received a couple of spare tubes, which I guess was part of the idea because they were mundane objects at the time. Now, ironically, those tubes are becoming harder to find. So a body of work that most likely raised questions about mass production is now something akin to a candle. It is literally burning away its finite resources, as long as it is being exhibited.

And so the works now possess a unique quality of being static, yet finite. Unlike traditional paintings and sculptures. I found this to be an interesting example of how context changes the meaning of things.